The first thing which struck me when I heard about this movie was the euphemistic similarity between the title (Gadhama) and Malayalam word for slave(Adima).After seeing the film I strongly feel that my insight was true to its core. 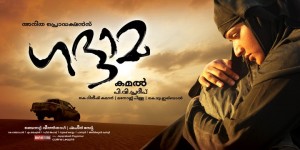 her native to the desert-dominating middle-east due to financial responsibilities entrusted to her. Her husband’s (Biju Menon) untimely death leaves her as the sole bread-winner of two families. Suraj who plays the role of a driver named Usman in a palatial Arabic residence  gets her the job of gadhama (Arabic word for house maid) in the same family .The story moves slowly as we visually experiences the physical torture mental abuses and sexual exploitation of an innocent maid. Usman is dismissed from his service as driver as the Arabs find out an illegitimate relationship between him and an Indonesian “gadhama”. After enduring unbearable suffering Aswathy takes a bold yet scary decision to escape from the house. The second half of the film revolves around the hardships and torments Ashwathy faces as she wanders aimlessly in an alien country.

The subplot of the movie presents Razack (Sreenivasan) as a social worker who helps the expatriates in trouble. It is through his eyes and words we see and hear the heart wrenching saga of a Pattambi woman. After much confusions and commotions Razack finally finds Ashwathy, helps her out of a robbery case charged against her and arranges for her journey back to her native land.

Even though the story lacks enough substance to be made in to a full movie, director Kamal has succeeded in portraying many interesting and powerful characters. Basheer (Shine Tom) who offers a helping hand in trouble produces a deep impact on the viewers despite his short onscreen presence. The Indonesian maid who sells her body for a few riyals, the old workman who exploits the kindness of Bashir, Bharathan(Murali Gopi) who decides to protect Ashwathy sacrificing himself-each character has some poignant message to deliver.

Kavya has done her best as Aswathy which can be considered a “come back” in her career after Perumazhakalam. Sreenivasan with his descriptive yet sharp dialogues has perfectly enacted the role of a philanthropist.

The movie ends on a positive note giving hope to the viewers that things will now on be favorable for Aswathy. Gadhama is a realistic picture with a handful of lifelike characters and events that could happen or would have happened to many in a foreign soil.