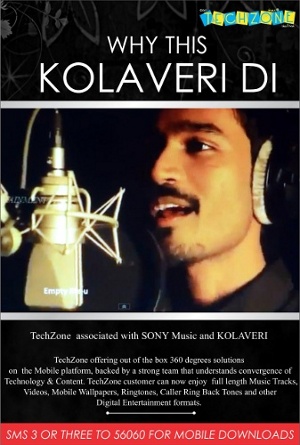 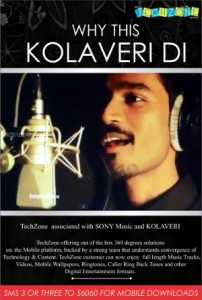 It is not surprising that a song so innovative and refreshing like ‘Why this Kolaveri di’ came from the Tamil film industry. This South Indian movie industry has been cultivating refreshing new talents over the past few years. Nowhere is this spirit more clear than in their film music direction department.

Coming to the music department, the Tamilians outruns any music industry in the country. They have a bunch of talented technicians and programmers who know how not to destroy good music. Music directors don’t have to look for options outside their realm, or venture into Bollywood, where music lacks soul. It is all just duplicate rap and nonsense DJ’ing there. But let’s just keep track of the Tamilians now.

For years, Tamil music meant A R Rahman and Ilayaraja. Occasionally, Karthik Raja too came up with some good numbers. But, even back then Tamil musicians never hesitated to try out something new. They gave opportunity to fresh voices like Harini and Swarnalatha. Venkat Prabhu, the now prominent film director in the industry started out as a playback singer during the 1990s. A noticeable difference happened with the coming of Harris Jayaraj.

Critics often denounce Harris because his songs are too simple. When Minnale became a hit, the song Vaseegara became the chart topper. Almost all the songs in the film had his signature. But the real reason for Harris’  importance lies in the fact that he was able to maintain his success throughout his career as a music director. Minnale was followed by Majnu, 12 B, Samurai, Laysa Laysa and many more. There was a guarantee to all his songs. For the first time, there came a real alternative to A R Rahman.

The good thing about Tamil film music form then on was that it didn’t become a monopoly of A R and Harris. Instead it spread out. Yuvan Shankar Raja, son of music director Ilayaraja produced some inspiring music in 2001 (same year as Minnale) for the film Thulluvatho Ilame.  In the latter half of 2007, director Balaji Sakthivel introduced Joshua Sreedhar, another talented musician, through his film Kaadhal.

Film Director Shankar (producer of Kaadhal) came up with Boys, which had a torrent of fresh faces. Even though the music was by Rahman, Shankar gave up catering to super stars in this film. Even though the film was declared a flop by reviewers, it made a clear distinction as far as movie going public was concerned. Shankar pointed out that “only youngsters came to watch the movie”, a trend which was initiated by Thulluvatho Ilame.

With Boys, Tamil filmmakers had the guts to try out new faces. Kaadhal and Chennai 600028 are examples for this. By then music too had reached the next level.  Music directors who started out young like Vidyasagar, Manisharma, Kasthoori Raja, Devishri Prasad, and Imman tried to keep up their pace with the fresh faces in the industry. And they did create a few good numbers. But they were not versatile like Harris or Yuvan Shankar.

In comes music directors like G V Prakash Kumar and Vijay Anthony and the avalanche of fresh music directors ceases to stop in Tamil. G V Prakash’s music for Veyil, Angadi Theru, Adukalam and the latest Mayakkam Enna has all garnered popular and critical acclaim. Vijay Anthony won the Golden Lion at Cannes 2009 for his song Nakku Mukka. The contributions by rappers like Yogi B and Balzee too cannot be ignored.Today, even unknown music directors will get noticed, and will be appreciated in Tamil if the music they create is good. That is, even if it is only a single like ‘Kangal Irandal’, (composed by James Vasanthan) it will at least get a nomination for a Filmfare award.

While this article concentrates mainly on the popular-film music circuits, it doesn’t mention the millions of underground musicians who also have a pivotal role in keeping  pure music alive.