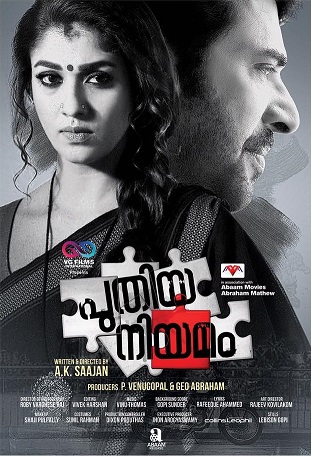 The screens in this October got sizzled with the Malayalam thriller movie ‘Puthiya Niyamam’, written and directed by A.K. Sajan. The important roles were led by Mammotty and Nayanthara along with baby Ananya.Puthiya Niyamam is a suspense movie showcasing a women’s revenge against peoples who molested her. Puthiya Niyamam takes the audience to more anxiety level such that what is happening next. It gives more visual treat to the audience. Mammoty’s character name is Louis Pothen, a divorce Lawyer and also working in live TV channel. Nayanthara’s character name is Vasuki Iyer, a kathakali artist. They are living together along with their daughter away from their relatives since their inter-caste marriage.

Unfortunately,Vasuki was raped by two neighbors with the support of a cloth presser. But she frightened to discuss with her husband. DCP Jeena Bhai’s telephonic communication help her to kill the rapist. DCP Jeena Bhai suggest her to remove all the contact evidence between them. Swami informed Louis that he is witness for the rape of Vasuki. But he did not have courage to raise his voice against them, because they are blatant and drug addicts. Puthiya Niyamam is a mind provoking film and give more courage to the woman’s who are suffering from these sexual harassment.