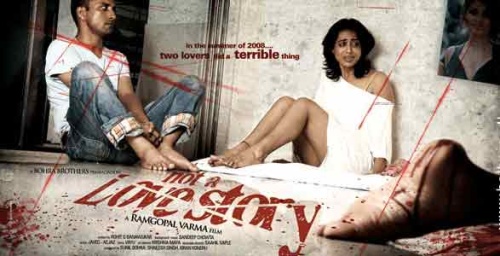 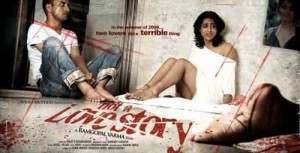 Ram Gopal Varma is touted as the director of gangster movies. But there is a different aspect to this director when he shifts his zone to other genres. It is quite fascinating to observe that while his gangsters are ordinary people, acting like normal human beings, it is his heroes and heroines who act a bit out of normal. Pyar tu ne kya kiya, Naach, Sarkar, Nishabd and his latest offering Not a love story are all testimonies for their unconventional and weird protagonists.

Anusha (Mahie Gill) is an aspiring actress and she wants to make it big in Bollywood. Her possessive boyfriend, Robin (Deepak Dobriyal) does have some reservations about this, but later concurs to her wish. Anusha does strike a successful deal with filmmaker Ashish Bhatnagar( Ajay Gehi). One night after getting drunk both Anusha and Ashish ends up having sex in her apartment. An unexpected visit by Robin results in Ashish’s murder.

Murder, like romance has been exploited too much in cinema. Perhaps that is why one doesn’t find anything that much engaging in the film till the point of Ashish’s murder. However, an electrifying performance by Mahie Gill and Deepak Dobriyal keeps the audience fixed on the screen throughout the first half.

There are no heroes or heroines in this film. Both Anusha and Robin have shades of villainy textured over them. However, there is a deliberate effort on the director’s part to make the audience sympathize with both these characters. Hence we have a story told through the point of view of two murderers.

It might not be apt to consider Not A Love Story as a Ram Gopal Varma comeback movie. One the other hand, when compared to his recent movies, NALS definitely reflects his old style of filmmaking which we used to adore. One is forced to think about his 2003 horror movie Bhoot, which was also shot mostly in an apartment. In the scene where Anusha returns to her flat after burning Ashish’s body, there is a looming air of gloom and claustrophobia that beautifully recreates the fear and tension of a horror film. The viewers are forced to believe that somewhere inside the flat there is a ghost. The sequence lasts for just around 10-15 seconds but shows that RGV has not lost his gift yet.

Varma captures the tension through hand held camera sequences. There is also a sequence inside a shopping mall which is shot with the help of a hand held mobile camera. However, music turns out to be a foe. Sandeep Chowta’s music is loud, uncanny and at times monotonous. RGV’s newly found addiction with wired and annoying camera angles are used in this film too, but not to the extent of testing the viewer’s patience.