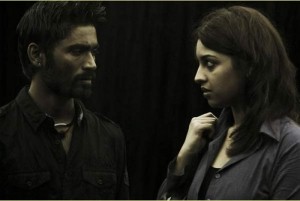 Director Selvaraghavan made Mayakkam Enna in the midst of a torrent of other projects in his mind. Midway through the production stages of the film, he was thrown out of Kamal Hassan’s Viswaroopam, a film which he was supposed to direct. He also need to start shooting for his next movie Irandam Ulakam starring Arya and Anushka Shetty, this December, even before the success of Mayakkam Enna sinks in. However, the director seems to take such exhausting deadlines with ease, as his latest offering, starring Dhanush and Richa Gangopadhyay takes movie halls by storm.

Mayakkam Enna tells a simple story, the story of Karthik Swaminathan (Dhanush), an aspiring wildlife photographer. However, his dream of pursuing a career in photography is constantly shattered when none of the companies he meet offer him a job there. Even his mentor in photography Madhesh Krishnaswamy (Raviprakash) denounces him. However, things change once he meets Yamini (Richa), his friend’s girlfriend. Both of them develop an emotional bond which results in their marriage.

One day Karthik finds in the newspapers that Madhesh has received the best photography award for a photo which was actually taken by him. Disillusioned and disturbed, he falls from the balcony and loses his mind. He starts to act abnormally and behaves abusively to Yamini. Her friends advise to lock up Karthik in a mental asylum. However, she refuses to give up on Karthik.

For the past few years, viewers have been made to watch films that tell multiple storylines. The good thing about Mayakkam Enna is that it doesn’t follow this pattern. The film tells only one story, but tells it with conviction. Like most Selvaraghavan films, here too we have misfits taking the center stage. It would be wrong to use the word misfit. The fact is, his heroes and heroines think out of the ordinary. They live in a world of their own, which, for an outsider might seem abnormal. However, they all find an equally strange person who has a similar line of thought, in whom they find some support.

Karthik’s photographs are denounced by professional photographers and experts, but, are liked by Yamini. His friends too appreciate his skill as a photographer and make him their official photographer for their getaway trips and occasional parties. But no one understands the depth in his photos like Yamini. It is this deep-rooted understanding that brings together Karthik and Yamini.

Dhanush as Karthik Swaminathan delivers a flawless performance. There are many places in the script where other actors would simply overdo. But Dhanush handles such portions with restraint and does things in his own style. Richa Gangopadyay plays the strongest character in the movie as Karthik’s wife. It is simply amazing to see such versatility in an actress who is only three films old. Both Karthik and Yamini become mature as the story progresses. The situations in which they find themselves in make them bold. Dhanush’s and Richa’s acting is watertight in such transformations.

G V Prakash Kumar has set the tunes for songs penned by Selvaraghavan and Dhanush. Ramji, who has earlier cranked the camera for Raam, Paruthiveeran and Aayirathil Oruvan provides some breathtaking visuals and still photographs. The editing department however, slows down the pace of the story but maintains things without going out of hand. The film deserves credit for its excellent characterization. But more than that, it has a wonderful narrative that progressively grows into the viewer, and keeps them within its cinematic context.