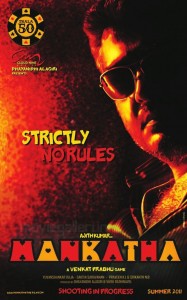 Insincere would be the right word that can be used to evaluate the effort Venkat Prabhu has taken for his new film Mankatha. Since he has set his footing at a pretty higher level with his first three path breaking movies Chennai 600028, Saroja and Goa director Venkat Prabhu was quite confident that anything he serves will be gulped down by the audience without a second thought. It might be this over confidence that has resulted in the pathetic execution of the script of Mankatha.As showcased in the trailer it is a heist movie that backgrounds the match fixing allegations that are common during the IPL matches. The film is supposed to narrate a story about a heist of cricket betting money, executed by a gang of four thieves. They were joined by a suspended cop Vinayak Mahadevan and the drama is unleashed.

But more than its plot, characters or the craft Mankatha relies heavily on the fan following of the star actor Ajith not for the credibility of the action scenes but to add a comic touch to anything and everything done by the actor. Confining himself to his regular techniques of spoofs and satire Venkat Prabhu has drawn a script that reminds us of those countless roles enacted by the ‘Thala’ of Tamil film industry. It seems that the protagonist of the film is not the suspended cop Vinayak Mahadevan but the super star Ajith.

Of course there are ever so many funny moments in the film but for those of us who memorize the hilarious moments in Goa it is neither comic nor thrilling. In fact the major flaw of the movie is its uncertainty in fixing the genre. It is neither a thriller nor slapstick. Sometimes it ventures for a real action thriller; in between mixes some elements of a spoof and falls somewhere between the two. That doesn’t mean that genre rules, introduced by the Hollywood mafia to the silver screen, is very essential to cinema and blending them is a sin. We have some fine examples in world cinema where these stringent rules are violated brutally yet beautifully. But what we see here is a confused director who doesn’t seem to understand what he is doing and is forced to repeat himself. Though the director in his previous movies has satirized the very ingredients of the popular films he too has pathetically ended up using the same stuffs to colour his film.

Commenting on the other aspects of the movie; Arjun another veteran actor plays the role of Prithvi, Assistant Commissioner of Police who takes charge to end the betting scandal. Premji Amaren, who has now become an inevitable part of all Venkat Prabhu movies, is once again forced to perform whatever buffooneries he has done in his previous films. And yes the female characters; we have the gorgeous Thrisha, and the hot Laxmi Ray (so says the movie but most of the time she is wet with the water in the swimming pool). Both of them fail to create an impression in the minds of the audience for they are not there for that purpose.

The cinematography by Sakthi Saravanan and editing by Praveen K. L. are not that great to spare a para. Indeed it was their effort that helped Venkat’s “game” to fit into the contours of the popular Tamil movies. So does the music by Yuvan Shankar Raja.

Mankatha’s attempt for novelty is in fact a pretension. In its attempt to deconstruct the familiar notion of a thriller the film has itself fallen in to the trap of those ideas.