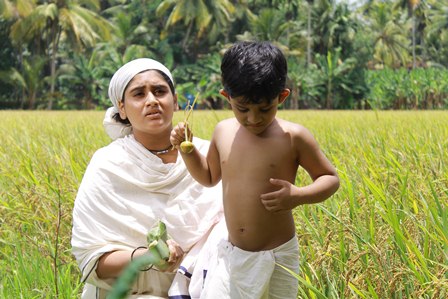 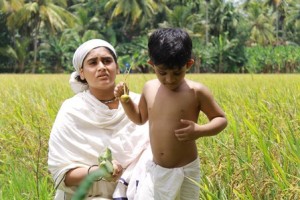 Kunjedathiye thanneyallo unnikere ishtam… an intense line that lingers in the mind of countless Malayalees, is part of the verse Kunjedathi, enlivened by poet Sri. ONV Kurup.

The small slice of life represented in the film has been given a visual language, in a screen time of thirty minutes, by Prasad Nooranadu, Programme Producer at Kairali TV. The film was previewed at Kalabhavan theatre in the presence of the poet.
Representing the sanctity and innocence of village life in Kerala, the narrative projects a poignant tale of Unni and his Kunjedathi. “The film was simple and straight, conveying the mood very powerfully,” said Sri. Kanayi Kunjiraman, the renowned sculptor from Trivandrum.

The kinship between Unni and his Kunjedathi forms the thread for the verse, which goes on to narrate a tragic tale. With allegorical statements, the poem hints at the miserable conditions of the family, and the circumstances that lead to the death of Kunjedathi.
The film carefully develops upon the thread, and gets supplemented by the visuals of a panoramic suburban village. The film provides adequate details of the events and conditions represented in the poem.

When asked about the inspiration, the director says, “This is a poem which has invariably captured the attention of all Malayalees. The support given by Sri. ONV Kurup gave the impetus to go forward with the project. “

Actress Dimple Rose played the part of Kunjedathi and Aromal, son of actress Beena Antony enacted the role of Unni. Poojapura Radhakrishnan, Mavelikara Ramachandran and Manu Nair are the other people who were part of the cast. Anil Mughthala did the story and screenplay for the film, which was produced by Biju Kallumala, under the banner of SreeLekshmi Creations. Cinematography and Editing was done by Rajiv Vijay and Hashim respectively.