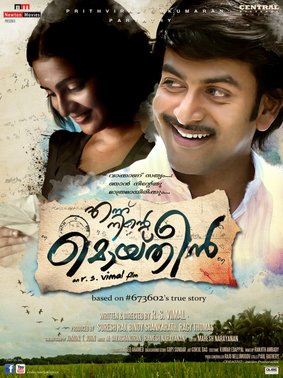 ‘Ennu Ninte Moideen’ is a nominal love story with full of love, gloom, faith and tragedy. The two main characters are from orthodox families; a Muslim boy named Moideen (Prithviraj) and a Hindu girl named Kanchanamala (Parvathy). This film was written and directed by R.S Vimal. Moideen is an extreme socialist and a attractive football player. Kanchanamala is an intelligent and brave girl who was brave enough to go bitter against her powerful hostel administration.
Moideen and Kanchanamala were babyhood friends. Their love story had a specialty that, they communicated through encoded language-letters that has been developed by them. The two families reckoning their relationship tries to breaking all the connections with each other. And this leads to her studies pause with a full stop.
Yet, these blows only strengthened their love. Even after these issues, Moideen and Kanchana moved with one soul and one mind. Later they passed 20 years without any talk or any meetings. But they communicated by passing letters through trusted servants. For these reasons Kanchana is heavily exhausted by her fuddy-duddy relatives every time.
Ennu Ninte Moideen is not a masala movie. The movie makes the viewers excited as it was real one. This real story was in 1960s, but it is actually pointed the contemporary religious approaches of keralites in this century too. This movie raises some political questions to the society and needs some relevant calm answers to the coming generations. However the movie name itself is a synonym for an honest deep love.