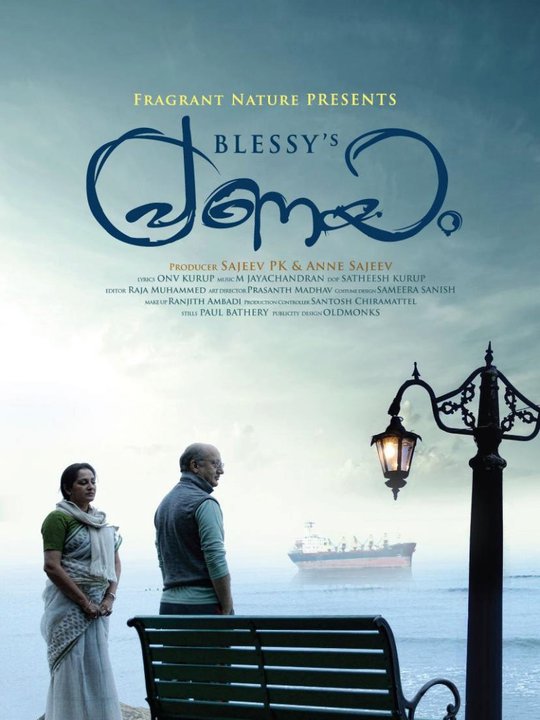 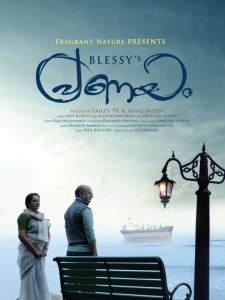 Love and intimacy transcends age and familial lines, oneliner for the new buzz of Malyalam cinema by the Mohanlal– Blessy combo.  Bollywood stars Anupam Kher and Jayaprada in lead roles added charm and curiosity to the film. With a commonplace title, Blessy has presented a different take on family, love, conjugal relation etc. “Pranayam” (meaning love) a cliched theme for films, has been used by the film maker to convey a kind of love that is out of the ordinary. A couple of thematic concerns help the film stand out of the normal narrative cinema.

The film is a family drama that redefines the familial lines. An admirable rapport developed by the couple Matthews and Grace, with Grace’s ex-husband Achutha Menon, strikes the keynote of the film. The trio experience a sense of rejuvenation in their lives which is incomprehensible to the children, or the younger generation. The younger generation here, becomes representative of the societal norms and the so-called middle class moralities, which makes people shed true feelings and emotions. While much of the contemporary cinema portrays path-breaking thoughts as voiced by the younger generation, here, people along in the years does the job. They take the liberty to question the norms and break the lines.

There is a powerful statement that love transcends age. Different facets of love are being portrayed- conjugal love, father-son love, teenage love etc. But none gets elevated to a Platonic stature, except those epitomised by Matthews- Grace or Menon-Grace. Though Menon and Grace shared a passionate love during their hay-days, it does not have the depth or intensity with which they share after their second meeting. The spark of the narrative falls on the life led by the trio after a “Randaamoozham” (the second chance), as Menon puts it. The trio, who is in the latter phase of their life gets enough time to analyse and understand life, love and self, unlike the young couples who are busy with their material life. Thus there is an underlying statement that old age is the best time you can love, enjoy and live life for yourself.

The philosophical statement of love, by Matthews is perhaps the filmmaker’s contentions given voice. The Canadian song “Im your man…,” the panoramic ambience of the sea, the distant ships, the butterfly, though clichéd and overused metaphors, add colour to the theme of love. Blessy’s concept of glorified old age love has been acted out to perfection by the Mohanlal, Jayaprada and Anupam Kher. Even with an apparent incongruity in the dialogue rendering of Anupam Kher, there is enough of his acting skills to overlook the poor dubbing. While ‘Thanmaatra’ and ‘Bhramaram’ were an inevitable Mohanlal starrer, here the screen space is shared by three central characters. Nevertheless, there is an evident compromising attitude towards the supporting cast. The characters of the younger generation closely fit into stereotyped roles, as if meant only for striking a contrast with the central characters.

Even when we hail the film for all the aforementioned factors, it should be remembered that these are themes explored long back in World Cinema. A woman and the two men of her life has been one of the path breaking experiments of French New Wave films like ‘Jules et Jim,’ which has taken its time to reach the conventional strictures of Malayalam cinema.

It is apparent that Blessy’s story line has the 2010 Chinese film ‘Apart Together’ as a known or unknown source of inspiration. Set in political backdrop of communistChina, the film follows the developments after the wife’s ex-lover comes into the life of the old couple. The ideal and practical husband welcomes the decision of the ex-lovers to reunite after a gap of 40 years. It is for the children that the decision is unwelcoming. The practical and materialistic attitude of the younger generations contrasts with the deep understanding and love shared by the old people. With many inevitable twists and turns the film is much similar to its Chinese counterpart. Nevertheless, this is a story that should reach the society, though a little late.

1 thought on “‘Pranayam’ – Breaking the Contours of Love”